Renato Borilli, CEO of Borilli Racing, thank to the success of last season with Maxim in the Italian championships decided to extend the working relationship even to the current year, the bond that for years has linked Italy with the Borilli family remains stable; in fact, Antonio Borilli, left Padua (Padova) to seek his fortune in Brazil and the great-grandson, Renato Borilli “came back” to Italy to show the results of his hard work. This year the collaboration moves internationally but it still remains connected to an Italian reality such as Maxim. 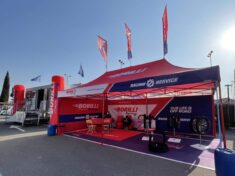 Borilli has been creating tires of the highest level for years, perfect for accompanying drivers along routes of all levels, giving both the professional and the amateur a tire suitable for all weather and terrain conditions, thanks to the wide range of products created by them. The research and continuous development in the production of tires allows the Brazilian company to create a perfect product for every type of competition thanks to a constant passion and love for the discipline that gives to the items in the range unique characteristics difficult to find elsewhere.

On March 19th, in the town of Pietramontecorvino (FO, Italy), the Borilli branded championship will open the curtain under the direction of Maxim who for the first time will direct the work of one of the most important championships by the discipline of clawed wheels that since the 60s has been dealing with creating high-level competitions that can be a springboard for drivers in the world of international Enduro.

END_OF_DOCUMENT_TOKEN_TO_BE_REPLACED

Maxim is pleased to present its working group for this season; Tony and Monica Mori, official promoters of the Enduro European Championship, thanks to their twenty years of experience in organising sporting events, set out to improve the championship.

As Track Inspector, the champion Gionni Fossati, a world-class driver who after leaving his competitive career has become a reference point in the development of various products in the world of motorsports. Thanks to its considerable skills regarding enduro, it will ensure that the tracks are sufficiently qualitative and safe

END_OF_DOCUMENT_TOKEN_TO_BE_REPLACED 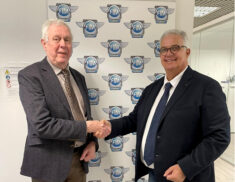 FIM Europe and Maxim are pleased to announce the new agreement for the promotion of the Enduro European Championship for the seasons 2022-2023-2024.
The company led by Tony and Monica Mori, based in Falzè di Piave (Treviso-Italy), will enhance and develop the championship starting from this new season with four rounds: the opening stage in Italy (Pietramontecorvino) on 19-20 March, round two in Hungary (Tamasi) on 2-3 April, round three on 13-14 August in Finland (Sipoo) and the final stage in Germany on 28-29-30 October.

END_OF_DOCUMENT_TOKEN_TO_BE_REPLACED

The FIM Europe, together with the Enduro & Rally Commission, is delighted to share the 2022 Enduro European Championship provisional calendar.

The season will be divided in two parts. The first one in springtime with the first round in Italy and the second one in Hungary. The second half of the year will see the third race in Finland in mid-August and the last and fourth round in Germany in late October.
Please visit the FIM Europe website to stay updated.
The FIM Europe and the Enduro & Rally Commission look forward to a fantastic new season of the Enduro European Championship in 2022 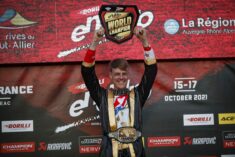 Beta’s Brad Freeman has been crowned the 2021 FIM EnduroGP World Champion at the sixth and final round of the championship in France. Doing it in style, Freeman raced to victory on day two in Langeac to secure the EnduroGP title.

EnduroGP – Freeman Claims Title
With the majority of the senior enduro titles won on Saturday, the talking point for Sunday was about who would end the day as the FIM EnduroGP World Champion. With a 16-point lead over his closest rival, Brad Freeman held the upper hand and was determined to see things through.